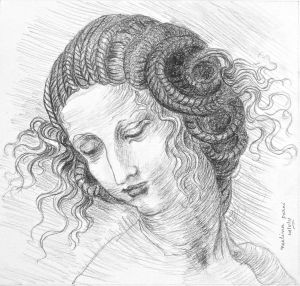 I toned down the circular braids on the right side, there was too much local contrast pulling the eye towards the area…added some shadows underneath to make them look more rounded …..and ..well..difficult to know where to stop.. especially if you like how its turned out; the more you like it, the more you tend to fiddle with it!

Note: See stages in this drawing 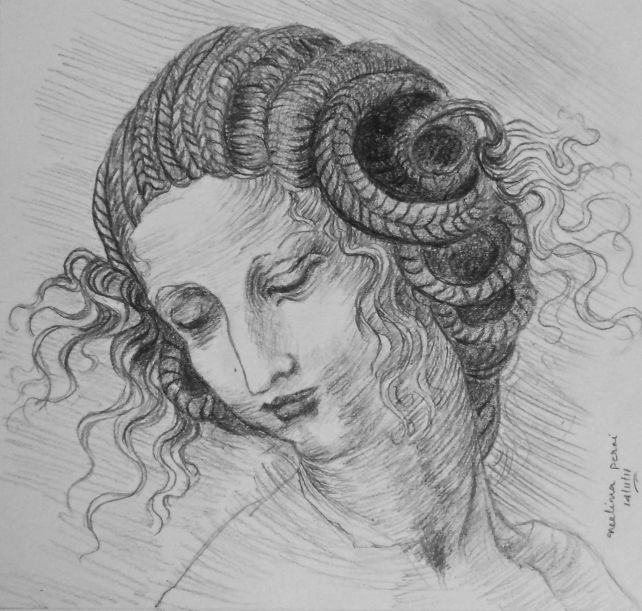 I have painstakingly copied each line and curve of Da Vinci´s drawing ‘Study of Leda’ in the hopes that his talent would somehow rub off on me…..kidding…just kidding….then again, maybe not…!  Looking at it on screen makes me realize I still have some more work to do on it, the tones have to be adjusted somewhat, will post again tomorrow..

I did this using the two cross hairs (two lines – vertical and horizontal) as described in Betty Edward´s book. Its really helpful. Here are the the photos of the stages in between. There is so much to learn from these old works… he has toned the drawing so beautifully, heavier, darker lines change into lighter lines seamlessly, in a continuous flow, and then back again into darker ones (for e.g., on the neck area) The small curves in the braids, as they go towards the back change in width and shape (even value), because the perspective changes, if they are made all the same, they will look flat and refuse to plunge backward.