Tetradic color schemes have a rectangular or quadratic relationship amongst the chosen colors. These schemes are quite lavish for now you have four colors to play around with but a little care must be taken in design to unite all of them together into a harmonious whole.

The split complementary tetrad (white and red rectangles in the above wheel form two examples) consists of two colors one space apart from each other and both their complements. In the white rectangle, the complements of red and orange are green and blue, so the scheme consists of red, orange, green and blue. These two pairs lie, naturally, on opposite sides of the wheel, one pair being warm and the other cool. Make one, either the warm or cool pair more dominant than the other. This can be done by using more of  one in terms of area but also in other ways…. e.g pure, strident hues (they stand out) against subdued or grayed colors or using hue or value contrast.

The adjacent complementary (yellow rectangle in the wheel above) tetrad consists of two adjacent colors along with their complements. This gives the most harmonious results amongst the three tetradic schemes because of the colors lying next to each other but still gives some movement  (some zing!) as compared to the analogous scheme because it includes colors lying on the opposite side of the wheel.  In this painting “whispers”, I`ve used red, red-violet, green and yellow-green (though the red is a cool red, schminke magenta).

The square tetrad or the cross complementary tetrad (the small violet square in the color wheel) consists of four colors equidistant on the color wheel, each spaced two colors apart from each other. Again, these are two pairs of complements. This forms the most striking and dynamic of all schemes as the colors are, so to say, thrown as far apart as possible from each other. In this example, I`ve used red-orange, yellow, blue-green and violet.

Apart from these there are other color schemes like

Monochromatic scheme – This scheme uses only one hue in its different values i.e. in all its tints, tones and shades.

Achromatic  scheme – An example would be artwork done in graphite. It is called achromatic because it is not in color. Adding slight hints of colors gives some variations to this theme.

Neutral scheme – consists of neutral or near neutral hues like browns, beiges, grays..

A complementary color scheme (indicated by the blue line on the chart) consists of hues that are opposite on the hue wheel. For e.g:  yellow and violet, blue and orange, blue-green and red-orange… you can make six pairs this way. They are farthest apart on the wheel and create dynamic contrast. Their temperatures will be opposite. When viewed next to each other, they enhance each other and create a vibratory effect. This scheme needs to be used with some care, else it can look a bit jarring. Try making one hue more dominant than the other to create harmony. The two hues used in tints, tones and shades as well as a combination of themselves and with neutrals can make an array of colors and need not be limiting.

An analogous-complementary scheme (indicated by the orange line on the chart) consists of three analogous hues and the hue opposite it. For e.g: Red with blue-green,green and yellow-green. Use the complement as an accent color rather than let both sides of the wheel vie for attention.

In nature, you can see these sets in the pale-yellow deep-violet of some iris or sunset skies; blue orange in bird-of-paradise or autumn maple leaves against a blue sky; pale red-violet pale yellow-green of young ornamental cabbage… Red-green is very common in nature, I`ve used it here in this painting of Geraniums. Raw sienna is the almost neutral accent color, though its not seen in the photo.

Here, I`ve made an abstract using blue-violet,violet,red-violet and yellow: 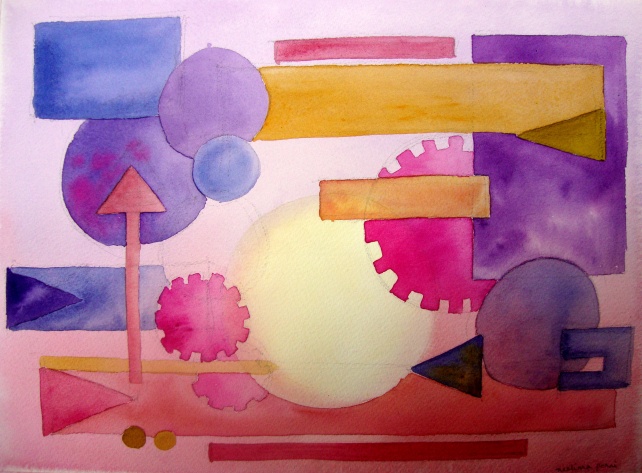