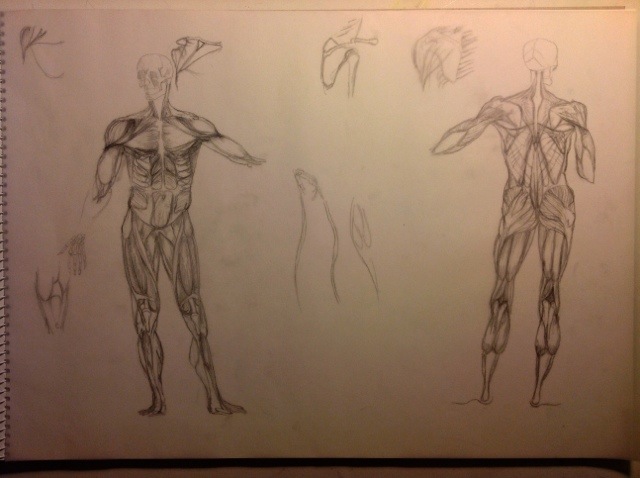 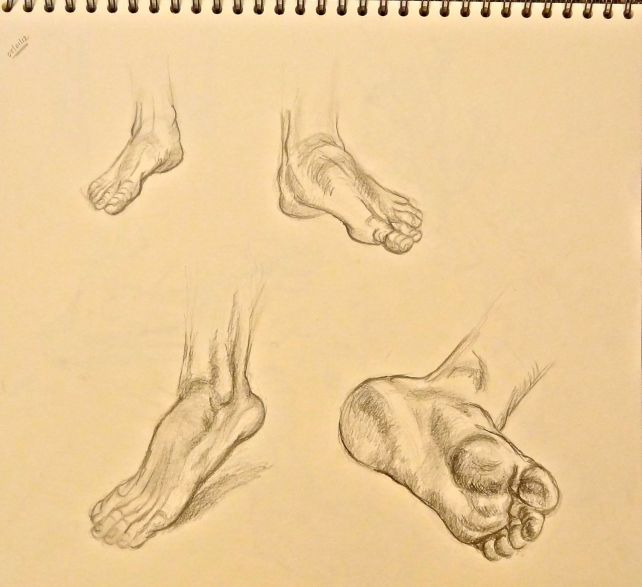 I´ve been doing these studies from Glenn Vilppu´s videos from a couple of weeks now; he teaches quite fantastically. His method is a little bit different from the classical approach in that he contains/draws the volumes first, instead of drawing the contours/outlines. By drawing the volumes, one begins to visualize the 3-d form that one is attempting to draw, easily, and the contours of these volumes automatically become the outlines of the form. This approach has a major advantage in that difficult foreshortened views of figures and limbs become quite simple to draw. He also explains the muscles and muscle groups  so beautifully from all possible viewpoints. Learning anatomy has become fun and too too exciting for me!! 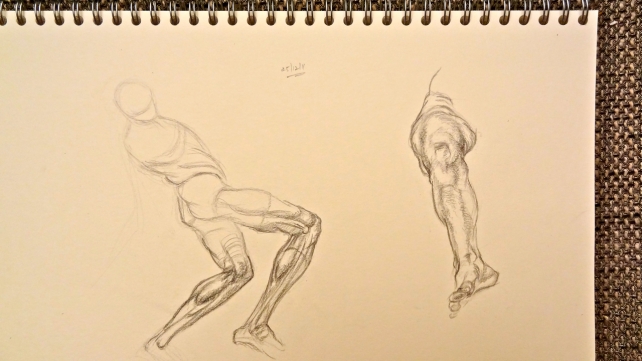 Bones of the skull

These are some views of the skull I have done from this video here, its really great, check it out. 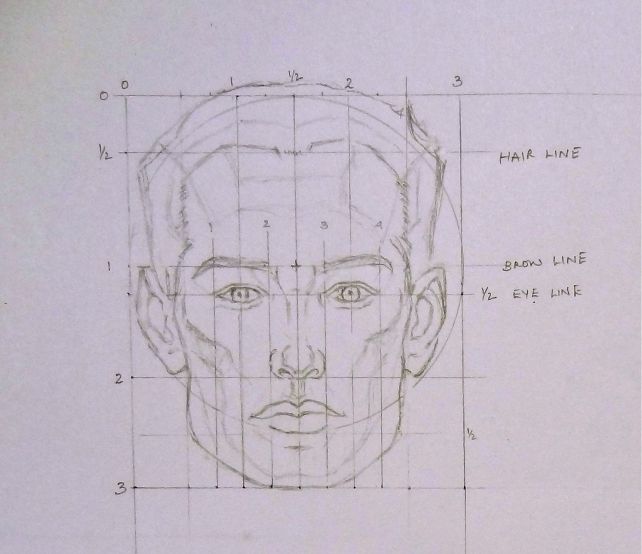 Hey everyone! How are you doing….? You know, I was just thinking….. now that I have somewhat closely studied the muscles of the human body; I was thinking, the next time someone asks me how I was doing, I am going to reply with a Oh….Um…let me see….you know….everything´s fine except my Extensor carpi radialis hurts from the badminton play….or …. my latissimus dorsi (the lats!) is sprained from the twists in the yoga that I did today or…or…you get the idea? ….. most probably people would stop asking me how I was doing, after that …….!

Coming back to heads, these first two heads are from ‘Drawing the head and hands’ by Andrew Loomis.  (sort of combined the proportions in page 43 with the planes in page 33) Its a really well proportioned head (are there any other women artists out there thinking how cool it would be to construct this way for real?? not the physical proportions, but emotionally… the way you want, little bit of this, little bit of that, more of this quality and less of that quality ha ha… guess it wouldn´t work.. life would be way too simple then! (and where´s the fun in that,right?)), and he gives the measurements for the front view and side view, but the problem is that, most often then not, heads are painted in the 3/4th view (because that is the most interesting angle) and you can´t use the same measurements in perspective, because of course, the widths start to decrease towards the vanishing points, also, one side decreases more rapidly than the other.

I have done this head form the same measurements in perspective and I thought I would share this here. (The head is at eye level here.) If you study the section on how to measure off unequal distances in perspective, you can apply that here. Two measuring points (MP) are randomly  chosen on the horizon, close to , but on opposite sides of the (vertical) measuring  scale. The widths of the front-view (first figure) are taken on the base line towards one side and the widths of the side-view (second figure) are taken on the same base line towards the other side. These points are extended towards the opposite measuring points. Where they cut the base lines of the face (which recede towards the two vanishing points) are your new widths in perspective from which you can construct the whole face. 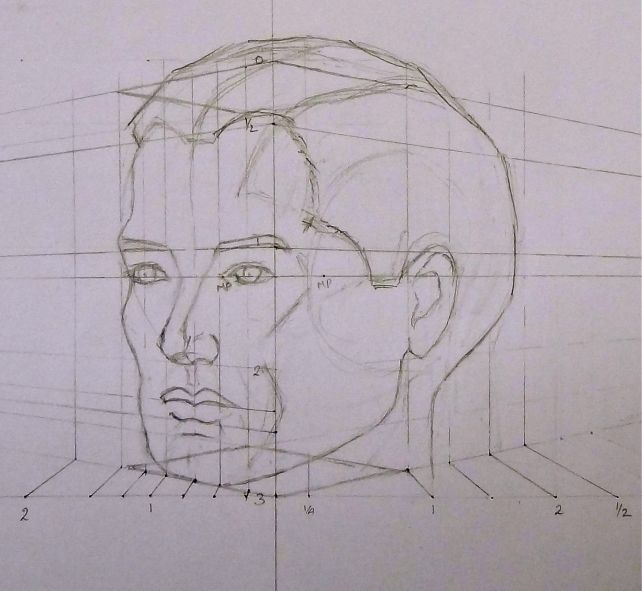 The front plane looks rather flat because you tend to follow the features along the straight, guiding lines but this front plane should be made curved, like in the ball and plane method.

The ball and plane method is much more intuitive and straight forward but the difficulty in that method lies in the very first step – dividing the ball into four equal parts in perspective. Slight deviations in those lines at the beginning, give rise to major distortions in the final face! Creating the sphere from perspective rules feels a little too complicated not to mention those countless lines running all over the face.

The initial circle can also be placed here for this method, but again, works only for the front and side views. The center of the circle for the front-view is in between the eye brows (marked by a small plus sign) and for the side-view, it is in front of the ear. For all the other views, it is a bit haphazard finding it, and can only be put in roughly. Any thoughts on an alternative way for going about this from anyone would be much appreciated…….!

Of course, with some practice, after a while, you wouldn´t be needing all these measurements but if you feel that your proportions always seem a liittle bit off, then doing this would really help you find where you are placing your lines wrong, because we do consistently make the same mistakes, like always judging the widths larger than they should be or making the lengths shorter.. things like that… 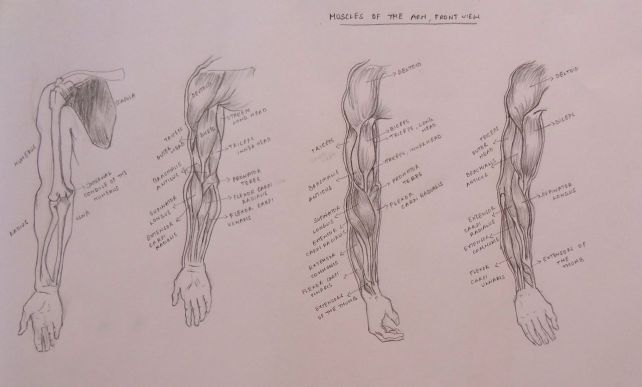 Muscles of the Arm, Front View

Muscles of the Arm , Other Views 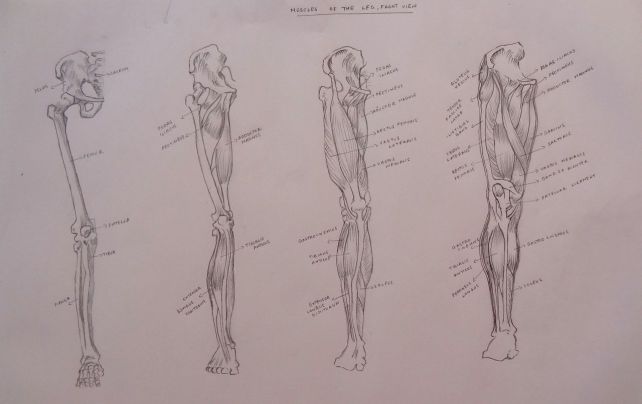 Muscles of the Leg, Front View

Muscles on the front and back of Figure

Figure Drawing for all its Worth

I´ve included a link at the end of this post, its a video where the muscles of the arm are explained very nicely with a way to remember their names. I liked the small sketch he made, captioned ´stay with it´ a lot! It says a lot about how good a teacher he was, don´t you think?

My child wanted to join in the fun, ha…. and he began drawing too while watching me do these at the childrens´hospital; we were there these past couple of days (nicht schlimm, he´s well now). Funny thing….. the first sequence of words he had picked up while first learning to speak, both in English and in German, was all the colors…. I didn´t force them onto him, ha ha… he was so interested, he used to keep asking which color is that, which is that… till he had learnt them all in one day! He might get confused in other things like, days in a week etc. but never in colors… and no.. I don´t think he will grow up to be an artist… he´s too into his bauen and Autos and Züge….

Muscles on the front and back of Figure

Muscles of the Arm, Front View

Muscles of the Arm , Other Views

Muscles of the Leg, Front View

…and lastly, my son´s perspective….

Figure Drawing for all its Worth

Muscles of the Arm explained

Figure drawing for all its worth - pg 59

Figure drawing for all its worth – pg 59

Figure drawing for all its worth – pg 30

Figure drawing for all its worth – pg 39

Figure drawing for all its worth – pg 41