Here is my painting completed along with a couple of crops below it: 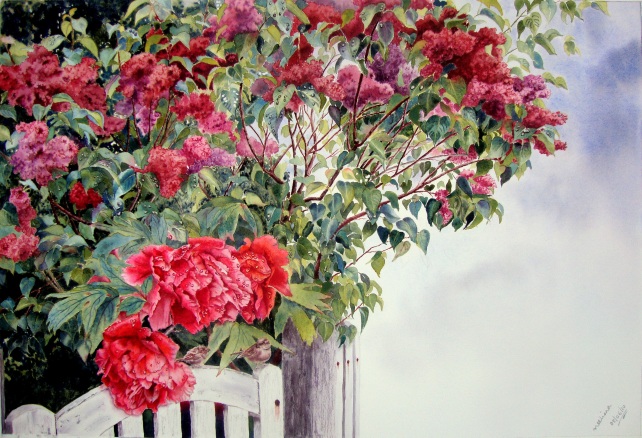 Here I`ve started on the background, just working my way on small bits around the foreground elements. There is an evergreen tree behind the lilac plant on the left hand side, so I`ve let some texture form there. Apart from the darker value, this texture is what separates the bg from the fg leaves. 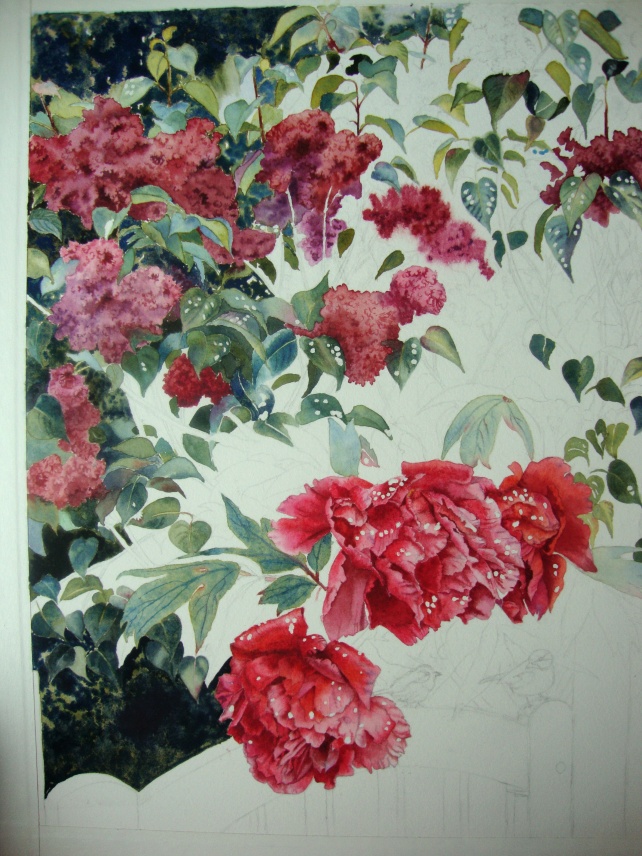 For the stems and branches, I`ve used perylene maroon with a touch of the dark mix of the leaves. The shadow side will have a darker mix but instead of a straight line, if you make irregular horiontal strokes, it gives the impression of bumps and rough texture of the bark.

These birds are Feldsperling (German sparrow or Eurasian tree sparrow), they like the country side and feed mostly on seeds.. (but I`ve spotted them many times around Mc Donalds!) Wet on wet washes give these the fluffy appearance. The fence takes a bit of dry brush work after a very pale wet in wet wash of some neutral colors. For the iron nail, use perylene maroon with a bit of yellow and a bit of indigo. With a damp brush lightly bring the color down to make a rust streak. 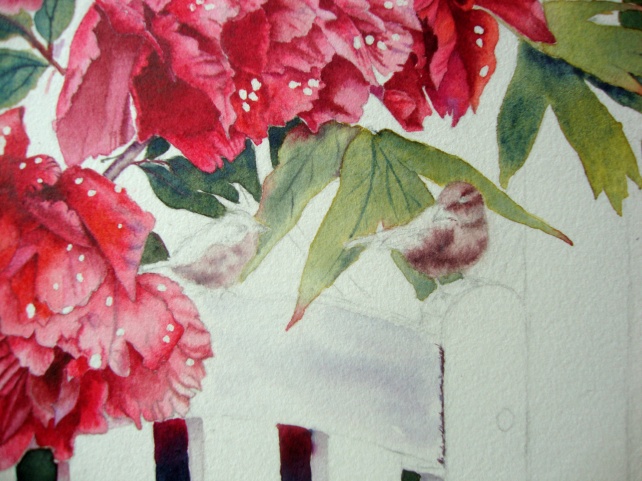 Leaves are flat and one dimensional but the way they twist and turn makes the shadows within them which can be used to define their form. The ultramarine blue and new gamboge make nice yellow green to green mixes without having to dull them with a compliment. Schminke`s indigo (this is quite opaque) can be added to give the blue greens. A bit of ruby red added to the UB blue and yellow mixes gives some nice darks for shadows. Since these are small areas, they can be most conveniently done by the wet on dry method. Leave a fine line for the central vein in the first wash and gently blend it in with a  yellow green in the next wash. It won`t look right if you u paint it in after the leaf has completely dried. While doing the individual leaves, the overall form of the plant has also to be kept in mind… the upper leaves catch the light, they have the most yellow in the yellow greens, the leaves at the bottom are in shadow and they are the darkest, a few leaves which are flat and without details will give the illusion of depth. In my reference, there`s very little interest in terms of the value arrangement and all the values lie almost exclusively in the mid range. By making the lights lighter and shadows darker, I`ve extended  this range a little.

The lilac leaves right under the lilacs reflect a little of the flower color, so drop in a bit of the reds in the leaf washes. This adds interest to the leaves and ties the flowers and leaves together visually. The peony leaves actually do have a bit of the warm red in them at the edges. I`m going to make them a bit darker and cooler since here the peony bush is placed under the lilac tree. Always check whether the veins are opposite are alternate flowing, here they are alternate.

This is what I`ve worked on in the previous week, I`ll try to be more regular and post every monday from now on. The sky is a mix of ultramarine blue and ruby red, paling towards the horizon. The addition of new gamboge to this (made slightly stronger) mix greys it down and I use this for just a slight suggestion of rain clouds. Very simple so that it doesn`t compete with the complex foreground. For now I`ve left the central area at the top blank until I decide if I should have just a hint of the sun shining through.

I`ve already done a demo on lilacs, so I wont go into it much here. I just went wild with all the colors that I had mentioned in my previous post. I worked wet-in-wet first while adding the sunlit and shadow colors and kept on working on details as it got dry. The floret consists of four petals with a dot for the center but the four petals  are seldom visible the way they are stacked, safer to make groups of two petalled ones with the four petalled ones here and there. Go over the areas that you have painted with a clean water damp brush (if the area has already dried) so that you have soft edges. You can paint these in two ways, study the whole flower carefully and put in the values as exactly as possible or have your colors ready and just plunge into it, after all you have seen them before a hundred times, you already know subconsciously how they`re arranged, if you don`t let yourself think then what you already feel inside will come out beautifully. Both methods work but I don`t have to tell you which one is more fun…….. (but also more scary!)

After a long weekend, I was on the way to pick up my son from his kindergarten and I had a fragrant surprise waiting for me……. the tulips, daffodils, snowdrops and primroses were all gone and instead were sweet smelling lilacs, pansies, peonies……everywhere. Its amazingly beautiful and utterly fascinating how the landscape changes so suddenly. It  can be ahem.. dangerous too if your`re anything like me in memorizing directions – left at the pink rhododendron bush, right at the yellow sunflowers …. Once we had shifted to a new house and summer was nearing its end. I went out for groceries not noticing while going that the yellow rose shrub at the corner had completely stopped flowering and while coming back I had lost my way! No worries, now I look to the buildings for directions not plants which I know will cheat on me! Well, anyway, coming back to the lilacs, I took this photo while it was still raining. The peonies are so huge they were drooping very heavily to the ground in the rain so that snap is from when they had picked up a little but not completely dry. I worked out a composition from these two and another one of sparrows. These cute little birds are very common here hopping their way about searching for food.  It doesn`t matter if your sketch done on location or photo doesn`t have all the details. You can fill these out from other sources like the net or field books. 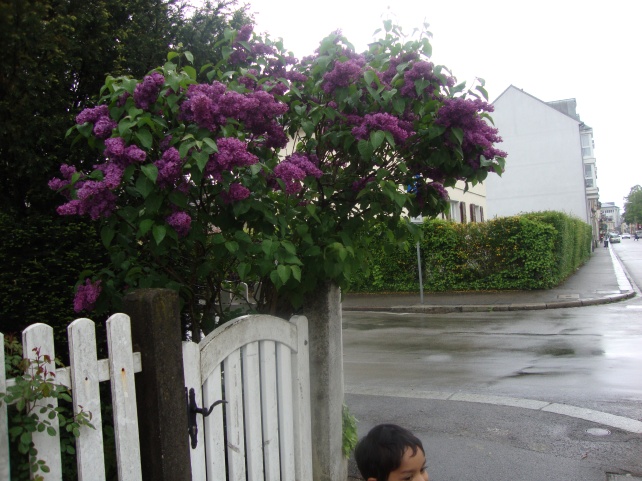 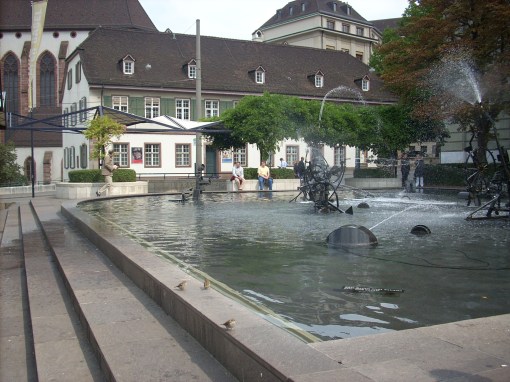 I`m still working on the drawing but some tips for a drawing like this – the stems are the directional elements so place these accurately first, you can shift them about if you feel it helps the composition, follow with roughly placing the flowers and foreground leaves. You can use a measuring scale or a grid. Now that you know these are accurately placed, you can take your time at filling in the details, maybe some bg elements (these can also be done later at the painting stage so that the drawing doesn`t look too confusing and you don`t have to find your place all the time) Also in a maze of leaves like these, it would help to sit for a longer period of time rather than short sessions because again you will end up having to keep finding your place in the pattern. Some of the lilacs are blurred and this is good, it adds interest to the painting if there is a combination of detailed ones and blurred ones; hard edged and soft edged. You can leave out some leaves and stems, choose the ones which add to the realistic effect and leave out ones which complicate the pattern unnecessarily. This is easier said than done for me. I think to myself that the highlight on this leaf is so pretty, the fall of this leaf and this stem is so graceful and so on and so forth that I usually end up having most everything…. But you can choose to have it as loose as you want to. For me, it is a pleasure to lose myself in this world of nature and forget for the time being the daily battles in life; and the longer that time can be the better. I have transferred the main elements from another sheet of paper to the watercolor paper and am drawing out the rest freehand.

For the peonies, the color choice was simple, the orange red is almost the exact hue of M Graham`s quin red (PR209).  Another red which I chose for them, one which is warmer is PV 19, Schminke`s ruby red and Maimeri blu`s rose lake are almost the same hue (is the ruby red a tad cooler?) and though one is listed as semi transparent and the other semi opaque, they have the same level of transparency. For the lilacs, I`m going to change the color from this purple in the photo to a lovely burgundy shade that I had seen some time back (the first I had seen on lilacs). Burgundy is the tertiary shade (shade is a color mixed with black, tint is a color mixed with white and tone is a color mixed with grey) of violet-red. (tertiary color is a color made by mixing a primary with a secondary).Using this color ensures that there is harmony when the eye moves from the orange-red, red of the peonies to the red-violet of the lilacs instead of the jump there would be from the orange-red of the peonies to the violet of the original lilacs. (that said, I also feel that any riot of colors would work for flowers). Winsor and Newton perylene maroon (PR179) mixed with Winsor and Newton quin magenta (PR122) is the color I was looking for. Perylene maroon can also be used as the shadows for the peonies which would tie the two flowers together. Coming to the blue, I had my heart set on Winsor and Newton`s dumont`s blue for the sky which leans towards violet, the next spoke in the color wheel instead of a pthalo blue which leans towards green and which would have been a jump. But Dumont`s blue which has some red in it does not make clear greens, so I have opted for Daniel Smith`s ultramarine blue and new gamboge.